How to deal with North Korea?

One thing that caught my eye about the escape of "Sergeant Oh" from North Korea was that his stomach was filled with uncooked field corn, and was infested with worms; quite a bit of neglect considering he was part of a theoretically elite unit.  This would imply, really, that the country may be quite a paper tiger held together by a core of only a few hundred people.


This, in turn, implies that Charlton Heston showed us exactly how to deal with North Korea in the 1961 film El Cid; the city of Valencia (actually filmed in Peniscola) rebels against the North African garrison when the besieging army throws not rocks, fire, or dead animals into the city, but rather bread.


Just might be crazy enough to work, and with a bit of luck, Sophia Loren might do a cameo.
Posted by Bike Bubba at 7:51 AM No comments:

First, BMW has proposed, apparently, clear plastic tubes for bike riding.  Because no cyclist ever has a "jacket" he can put on if it's cold or wet, and certainly no cyclist ever likes to feel the breeze in his hair, and by no means would cyclists put in clear plastic tubes fear that someone would use that contained environment to stage something like a sarin gas attack.  No way, no how, right?


Hey, I want to avoid riding my bike on the streets of Shanghai as much as anyone, and because of that, I don't go to Shanghai.   Problem solved without paying to keep a thinly insulated tube climate controlled and safe from cultish terrorists.


And on the truly light side, somebody at Fox goobered this article asking why airlines make you put up your seats and windows for takeoff and landing.  After all, who doesn't want to depressurize the plane and suffer 500mph breezes in flight?  Obviously the flight attendants need to tell us all to put the windows up, never mind that there really is no way of opening them. (the article actually refers to the window blinds....)


And an update; the Washington Post "Fiction Check" gave Vice President Mike Pence three "Pinocchios" for something that was objectively true.  Oddly, their objections--on the grounds that labor force participation ought also be taken into account--never seem to have been made when Obama was President, and when labor force participation was even lower.  Gosh, why is that?


This humble blog awards the Post and its "fiction checkers" ten manure spreaders filled with Washington Post fake news for its combination of lying, hypocrisy, and blatant political bias. My apologies that I couldn't find a picture of a spreader fashionably adorned with the Post's logo.


And in other media news, the shocking revelation that media types knew about John Conyers' sexual harassment for years, but mysteriously could not find any way of acting on that information, say by printing it in the newspaper or putting it on the evening news.  They also earn the "spreader of shame" for their classy work.  After all, democracy dies in an avalanche of media bovine scat. 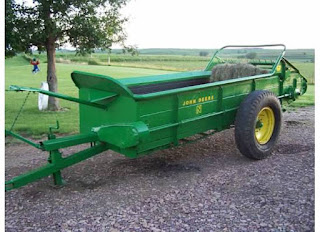 Posted by Bike Bubba at 1:10 PM No comments:

How is this legal?

Apparently the Martha's Vineyard home favored by the Obamas for their vacations, and owned by an Obama backer, is on the market for nearly $18 million.  Now if we calculate that rent on such a property would be somewhere between 0.1% of value/day ($18,000) to 1% of value/month ($180k/month), how, exactly, can we assume the Obamas could have afforded the $45k-126k/week rent on this place?  At 7000 square feet, it's not as if the Secret Service would have been paying for most of the rent, after all, because the President and his family would have been using a great portion of the home.  The article also mentions that a getaway favored by the Clintons sold for $29 million recently.


Seems to me that the vacation homes used by Democratic Presidents seem to heavily subsidize the left, which suggests to me that these "brother in law" prices are in effect...bribes.  If it's not illegal, it should be.
Posted by Bike Bubba at 2:37 PM No comments:

Michigan coach Jim Harbaugh (bane of Bears fans when he was in Chicago) is claiming that his team is close to greatness.  Well, as far as I know, the Buckeyes are still 190 miles away in Columbus, but perhaps he's referring to the Spartans in East Lansing, a mere 64 mile drive?  I'm pretty sure that he's not referring to State College or Madison, both of which are about 390 miles away.


Oddly, the closest to football greatness the stinky weasels get this year--unless they beat the Buckeyes of course--is the 45 mile drive to the home of the Motor City Kitties.  So I'm thinking Harbaugh is showing some clear signs of having participated in Michigan's "General Studies" program.  And go Bucks!

Posted by Bike Bubba at 2:25 PM No comments:

Whine of the day

Hilliary Clinton, one to make a big deal of how one ought to accept the results of elections--at least prior to November 2016--is apparently still trying to cast doubt on the legitimacy of Donald Trump's win.  It is as if she is unaware that many voters, including this one, might have seen her illegal server and dealings with Russian uranium companies as a bad sign.  It is as if she's forgotten that she didn't even bother to campaign in crucial swing states.


Or, it is as if she knows that "journalists" for fish-wrappers like Mother Jones aren't going to point out these obvious facts, and that she'll be able to keep getting six figure paychecks for content-free "speeches" to the already persuaded.  Honestly, I can see a bit of bias in journalism, but maybe, just maybe, we ought to be open to the obvious?
Posted by Bike Bubba at 2:43 PM No comments:

On the lack of touch

Helen Smith links a great piece about how our current horror of being accused of sexual impropriety, probably along with the nation's dismal marriage rate, is leading more and more men (and all of us) to be brutally isolated from physical touch.  Along these lines, it reminds me how encouraged I was when my daughter came back from a short term mission trip to Spain, and she and the other high school girls had decided they'd greet each other in the Spanish way--with a kiss, just like the New Testament describes no less than five times.


Most of us probably wouldn't be comfortable going that far, but there's a tremendous amount of good to be had from simple touch.
Posted by Bike Bubba at 8:13 AM 2 comments:

Here is a very good piece on the difficulties faced by fundagelicals (like myself) in the age of Roy Moore.
Posted by Bike Bubba at 10:24 AM 2 comments:

In a 60 minutes interview detailing her experiences with former doctor Larry Nassar, Olympic gymnast Aly Raisman goes at least halfway through a "five whys" root cause analysis to approach the question of why this issue has remained relatively quiet for decades.  Notice that she answers the question of "why didn't people speak up?" with "because they were afraid to", and then she asks the question of "why were they so intimidated by the culture?".


Count me jealous--not only an amazing gymnast, but a natural for the various professions of problem solving.  Well done, Aly.  Anyone who works with children ought as well to note her question, and take steps so nobody ever has to ask it regarding their organization.

Time to drain the swamp

It appears that the Department of Defense is routinely failing to report criminal convictions to the Brady background check system, including for the (redacted) who shot up a church in Texas.  Just as in many, many other cases, heads need to roll over this, and quite frankly I think we need an auditor to make sure that court martials do indeed report things like domestic violence.  In the case of the (redacted), his crimes really amount to aggravated assault if not attempted murder; we are not talking about a borderline case where someone yelled at his wife and was prosecuted for it.


Yes, it would kill a certain number of military careers if these convictions were faithfully reported, and that's probably why they were not.  But if these men are not safe to their families, exactly why would we assume they'd be safe around their fellow soldiers?


Long and short of it is that those who failed to report convictions need to lose their jobs, and we the taxpayers should end up paying significant damages to those hurt and killed in the recent atrocity.
Posted by Bike Bubba at 3:49 PM 2 comments:

....is summarized by this article about something Maureen O'Hara said in 1945; that she understood that her refusal to lie down on the casting couch and be sexually harassed and abused had cost her parts.  And as my family realized there she is again as we enjoyed yet another of her movies, we can have only disdain for those who treated her this way.  After all, she'd been a significant part of the Oscar-winning film How Green Was My Valley; it wasn't like she was jockeying for parts as an extra or the guy in the red shirt in Star Trek landing parties.  How much more cinematic greatness would the world have had if only the producers could have kept their attentions to their wives?  For that matter, how much more income would the producers have had?


Moreover, given that when O'Hara started her career, the Hays Code had only existed for about eight years, it's hard to believe that she was running into something new in the late 1930s and early 1940s.  So when you're looking at something that....stretches the envelope in terms of filmmaking, what you're looking at, in a manner of speaking, is the results of a century of grooming.
Posted by Bike Bubba at 12:05 PM No comments:

Happens in my town all the time

In Germany, a large zucchini has just been mistaken for a WWII bomb.  Now granted, more often the problem with zucchini around where I live is that churchgoers who don't lock their cars get them filled with zucchini from well-meaning "brothers in Christ", but sometimes, you know....


....and a Chicago thug learns the hard way that crime does not pay....OUCH.   Good shooting, Mr. Pouncy.  No word yet on whether he has received a rare humous "Darwin Award."
Posted by Bike Bubba at 3:48 PM 2 comments: