A thought on the Ukraine

As far as I can tell, the battle to save the Crimea was lost a long time ago--when President Obama removed anti-ballistic missile systems from eastern Europe in 2009, really, and was made a lot worse as he telegraphed his decisions, more or less telling the world "you just sit back a while, you'll get what you want if you wait until after the U.S. withdraws."  And then there's that "we'll have more freedom once I get reelected" bit.  Afghanistan and Iraq are even now paying a bitter price for this, and now it's Kiev's turn.

But that said, the controversy of the Crimea is about a former Muslim Khanate--the Tatars that tormented the Czars--absorbed into Russia, filled mostly (but not fully) with Russians and Ukrainians (58% and 24% respectively), then granted to the Ukraine in an effort to make it difficult for Kiev to operate independently of "Mother Russia."  It's a controversy that is more or less designed to be a pain in the rear for everyone involved.

So the solution?  Well, if I'm understanding things correctly, shedding the Crimea and a couple of other majority-Russian counties could be a huge blessing to the Ukraine.  Immediately the number of votes for the Pro-Russian party drops by about two million votes, and if the remaining Tatars want to be a pain like Chechnya, that would belong to Russia.  It might even reduce the fuel bill--though that's unsure, as Crimea does produce some natural gas.

In other words, you use the Russian tendency towards empire to make Ukraine a viable nation while ensuring that Russia has yet another headache to deal with.  You might even get Russia to pay for the Ukrainian bases and infrastructure they're taking.

OK, probably a moot point now--"leading from behind" is no way to run a superpower--but if we had someone in the White House who actually understood Russia and Eastern Europe (hint; they're all paranoid about being invaded, since it's happened so often), we might have had a much better result.
Posted by Bike Bubba at 1:33 PM 1 comment:

Where everybody knows your name

Back when we lived in a small town, but with its own emergency room, we were a little bit chagrined when our fourth daughter got on a first name basis with all of the doctors in town--but then remembered that there were only four of them, so it wasn't that bad.  Fast forward to this week, when our son was greeted at St. Mary's in Rochester by a nurse saying "weren't you just here last week?".    Since St. Mary's (the hospital used by the Mayo brothers and the Clinic today) is THE "go-to" emergency room for most of southern Minnesota, northeast Iowa, and western Wisconsin, it takes serendipity or some seriously bad luck to be recognized there. 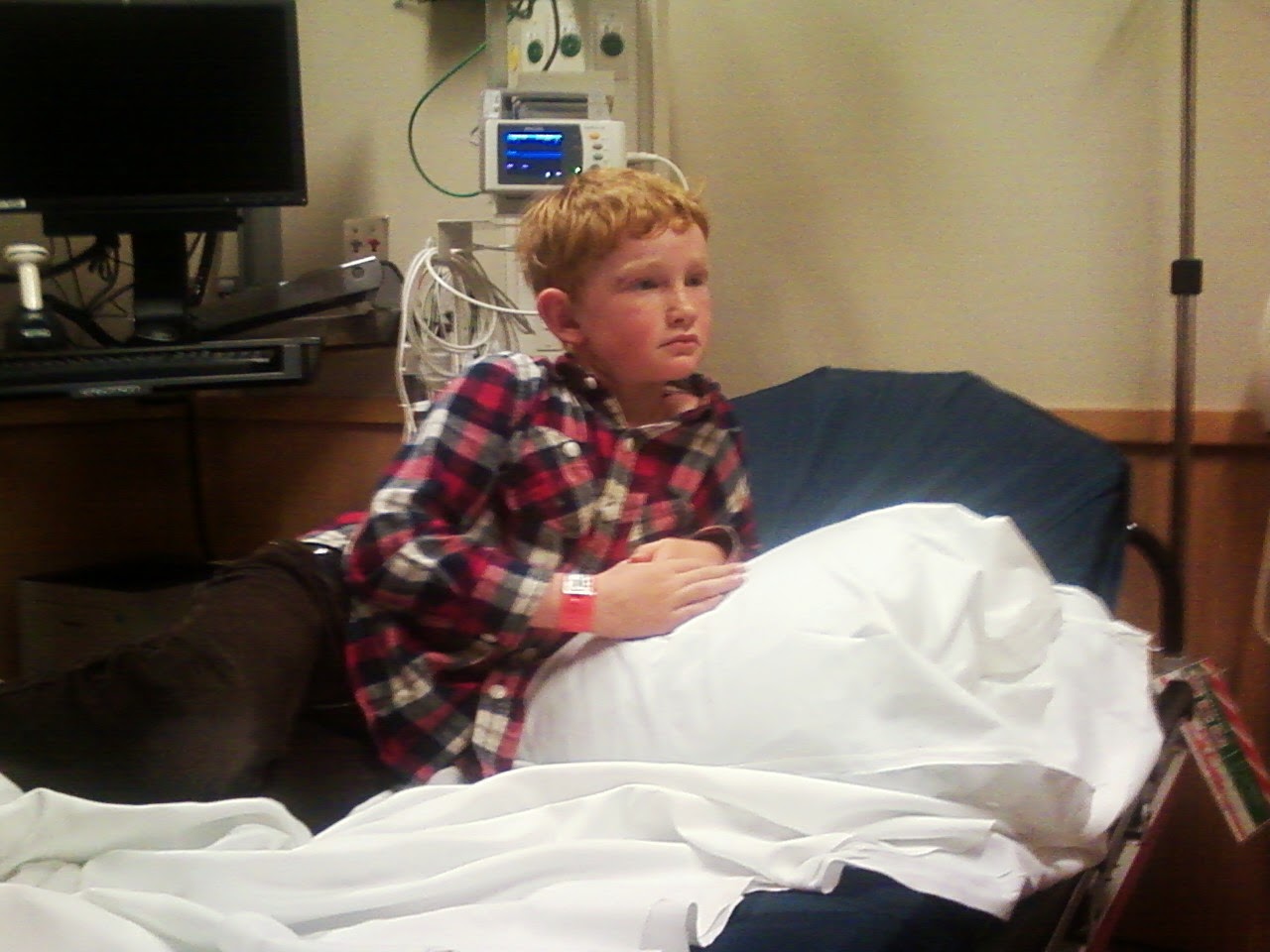 The little guy hard at work watching Cars while waiting for 5 stitches!

And it pays to patronize small business around here, too.  On one day, the gracious proprietress of "Ginny's Fine Fabrics" gave us some patterns for Civil War era dresses, and we got an invitation to the Wasioja Civil War Days ball from friends.  Just might have some sewing to do, and somehow I'm reminded of Famous Dave's.

I had a situation last night in a kids' program where I had to tell a child that I'd have to tell his mother about what he'd just done, and he begged me to give him the spanking instead of telling his mother.

When I mentioned this to my wife, her first response was that if any of our kids had been in the room, they'd have quickly told the poor soul that what he'd just said was a very, very bad idea.  None of them disagreed with Mrs. Bubba for some odd reason.
Posted by Bike Bubba at 7:54 PM 2 comments:

I did a bit of Hebrew and Greek study of the words for "worship"--Hebrew "Schachah" (Strong's 7812) and Greek proskyneo and sebomai, and I learned a few things that might make a very strong point in the "worship wars" of whether hymns, meeting and revival songs, or modern praise music ought to be used in worship.

The verdict I come to--and failed to arrive at in these earlier posts about worship and music--is that none of these forms ought to be used in worship, properly speaking.  No, I'm not urging Bach's cantatas and toccatas, Gregorian chants or the Orthodox equivalent, or even the singing of the metric Psalms--though I would be quite happy with these in church services, assuming the lyrics are orthodox.

Rather, the point is that worship, strictly speaking, does not refer to music.   It refers to bowing down before one who is acknowledged as superior, more or less utter submission in its implications.  Sometimes--as when Abraham talks about going to Mt. Moriah to worship--it can quietly refer to sacrifice, but it does not refer to music in the Temple, in the synagogue, or at church.

It is not always used with reference to the God of Abraham, but can be used with reference to pagan "deities."  About 3/4 of the time that "schachah" is used in reference to false gods, however, it is used this way--"to serve, and to worship"  It seems to imply that while one can simply fall down prostrate before God Almighty, some service must be rendered to the demons before one can submit to them.  One might suggest that it's a parallel of the Protestant doctrines of sola fide, sola gratia, and Solus Christus.  God did it all for us, therefore we can simply bow down before Him and worship.

Moreover, I wonder if there is a great treasure to be gained if Bible believers would only regain the proper doctrine of worship.  We seem to "mess around" a lot with music, prayer, skits, preaching, dance, offerings....but none of these are, strictly speaking, worship.  What would God do in our times of singing, prayer, preaching, offerings, and the like if only....we got out of the way at the beginning of each church meeting for a time when we could bow down and worship?

What if Protestant churches provided a way--yes, I'm thinking something akin to Catholic "kneelers" or the Pilgrim times of solemn humiliation--for the congregation to kneel and assume a posture of utter submission, a posture of worship?  What if we learned to walk into the auditorium with a hushed silence--yes those great old tall churches are wonderful for this--and assume an attitude of worship?

What would happen to the evangelical heresies of today--I am thinking specifically of evangelical feminism, among other heresies--if we understood worship as it truly is, as the pure and utter submission of the Church to Her Savior, of the Son to the Father.....and thus of a wife to her husband, a child to his father, and the like?  After all, Christ does not bow down to the Church, no?

So if you're asked about your position about the "worship wars", just let them know; worship isn't about music.  It's about our solemn humiliation and submission before God.  And once we get this down, then we might be able to think more clearly about lesser matters like music.
Posted by Bike Bubba at 7:50 PM 3 comments:

The death of project management?

Let's take a look at some recent debacles:

1.  The failure of the Lockheed-Martin designed speed skating suits at the Sochi Olympics.

2.  The debacle of the "Health Insurance Deform Act" portal at the federal level.

3.  The implosion, apparently, of up to 35 state exchanges for the Health Insurance Deform Act.

What do all of these have in common?  All admitted that they did not do significant testing prior to release, and as a result, all self-destructed.  In similar news, I've noted before that many of the "compact fluorescent" light bulbs I've bought--really anything but those producing about 500 to 800 lumens with the "corkscrew" configuration--are great candidates for getting a full refund because they simply don't last anywhere near the warranty period.  In other words, they didn't do reliability testing prior to release--and it would seem that the Department of Energy never called them on it, either.

(no surprise, really; the DOE has never, ever helped to develop an energy source that can compete in markets without subsidies.  It's not like they're interested in affordable energy or anything, after all)

Now it's particularly telling that these omissions were made, because the standard tools for risk management--FMEA, accelerated reliability testing, and the like--were by and large invented and promoted by none less than....the government.  And yet government officials allowed these programs to go live.

In other words, in government circles, the basics of program management are being ignored because the political realities loom greater for government officials than the impact on citizens.  Yes, be very, very afraid of the consequences, which shall be dire.
Posted by Bike Bubba at 2:38 PM 1 comment: