You might want to rethink it.  This author joins the Mayo Clinic in noting that it is a nutritional error to get all your calcium from one source, and in noting that cows do not, ahem, get their calcium from dairy products.  For reference, the Mayo Food Pyramid and the "Mayo Clinic Diet" place dairy as a source of protein and fat, not as its own "food group".  Plus, no less than Ahnuld Schwartzenegger Schurzenjaeger said this.

Don't get me wrong; I love cheese, ice cream, butter, and other dairy products.  They are a God-given blessing to man.  However, the USDA advice to drink a quart of milk a day as a child, and a pint a day as an adult, really derives more from the need to absorb the 84 billion kilograms of milk produced by 9 million dairy cattle than from a huge dietary need.
Posted by Bike Bubba at 8:46 AM No comments:

And Ernie Pyle is spinning in his grave.....

.....at the picture below.  Why so?  Well, the article from whence I got this picture notes that the M.S. Oliva sank due to "capsizing", and completely ignores the rocks the ship presumably hit, leading to her demise.  Seems that, as Mr. D. noted today, we no longer have a press that asks the difficult questions and "speaks truth to power".  We have court stenographers who report the story just as it was told to them. 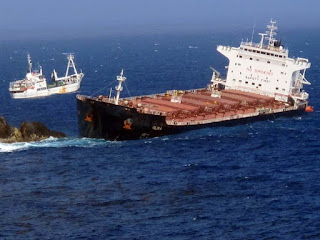 Bonus: click carefully on the picture and notice that the ship has a warning about smoking in letters that must be at least five feet tall. Seems that less important safety considerations were being followed than those that mattered. Here are other pictures, and here is a map of the area.  Wiki indicates that the ship was trying to clear Nightingale Island by a minimum amount--very strange since there aren't that many islands in the South Atlantic.  There were hundreds of miles of island-free ocean on either side.
At least the crew wasn't smoking.  Maybe.  ﻿
Posted by Bike Bubba at 9:03 AM No comments:

.....that donate money directly to Planned Parenthood Infanticide.  H/T Vox Day.  Vox suggests a gentle letter to them asking if they're OK with what's going on.

Update: in the comments, Jim points out that Wells Fargo matches employee donations to whatever group, so at least a great portion of their donations may be individually, not corporately, directed.

There is a site linked by my first link above which gives line by line evaluations of a number of companies with regards to their policies on marriage, abortion, 2nd amendment rights, and environmentalism.  Companies that do not come out looking good (among those I might patronize) are Macy's and Energizer.  The list differentiates between direct and matching contributions.

.....the appliance industry is pushing against proposed new federal regulations that would limit dishwasher water usage to 3.1 gallons per cycle from the current 5--and from the pre-2012 6.5.  Now speaking as a guy who routinely runs the dishwasher on "rinse & hold" before a full "tough" cycle with all the bells and whistles in an effort to get dishes clean, I've got just one thing to say.

It's about time somebody pushed back.

Part of the fun is that the DOE is estimating that dishwashers will last an average of 20 years (2-3x longer than they actually last), and that the industry will keep jobs while producing 35% fewer dishwashers.  Good luck with that logic.   Independent examination of the DOE proposal indicates that 70% of users would actually use more energy because they'd have to do a lot more hand washing.

As patriarch of a large family, I'd guess it's even worse than that.  We do a lot of hand washing simply because the dishwasher takes four hours to run.  Given that a shower is 20 gallons, I really don't see why the dishwasher needs to be below ten.  Clean dishes in an hour or two are worth it.
Posted by Bike Bubba at 1:24 PM 3 comments:

Here is a good read

The author argues that when we replace goals--lose 20 pounds or achieve financial freedom--with a system, we end up with a great deal of freedom and....not surprisingly end up achieving our goals, or exceeding them, without the stress of worrying about goals.

Along the same notes, W. E. Deming is said to have noted that with rare exceptions, every process is perfectly designed to give us exactly the results we're getting.  In other words, it's not that much about chance, but rather planning--a lot of people have said similar things, haven't they?

So what's your system?
Posted by Bike Bubba at 9:37 AM No comments:

.....the President is looking into places to live after January 2017.  Maybe with a bit of luck, he'll be right next door to his buddy Rod Blagojevich.

Seriously, some good and some bad in what Mr. Obama is doing here.  Reducing sentences for low level drug offenses sounds like a good idea--a reefer shouldn't be 20 years.  So if we're sure that people are truly in for "just" a reefer--and not that homicide charges were plea bargained down to drug charges--then I'm OK with that.

For reference, data from the Bureau of Justice Statistics indicate that less then 0.7% of all convictees are in jail for marijuana alone.  (h/t Ann Coulter)

On the flip side, Obama is urging that the practice of asking job applicants about criminal history be banned--ironically just as state governments around the nation are imposing more and more requirements for criminal background checks for more and more professions, and entire industries (education, finance) prohibit the employment of individuals with certain kinds of criminal records, not to mention "Megan's Law".  It is as if "Dear Leader" is entirely ignorant of why people might not want to work next to a (former?) drug dealer, rapist, or murderer.

Final note: the gentle reader is requested not to post completely unrelated comments on this site, especially long, rambling ones.  Thank you.
Posted by Bike Bubba at 8:57 AM No comments:

A thought about Grexit with a horrible pun

While enjoying a wonderful lunch at a local Greek restaurant, it occurred to me that if Greece abandons the euro, won't they have to serve "drachma" sandwiches instead?

One of the workers there assured me that whatever happens in Greece, the menu won't change, but you can never be too careful.  Stock up on gyros futures!
Posted by Bike Bubba at 8:47 AM 2 comments:

Or is it scariest that, knowing that some of those records were extremely sensitive, the government chose to store all of them in one place for "one stop shopping" for data thieves?  Apparently in the minds of government cybersecurity experts, "security" means "keep the whole fleet in Pearl Harbor where it's safe."

Nah, what's scariest is that the former head of OPM had zero experience in human relations outside of political appointments.  But we knew already what the risks are to hiring someone based on their race or ethnicity despite having no real world experience, didn't we?

Maybe it's time to check my credit records.....  Who knows what is in that database......government stupidity just boggles the mind sometimes.
Posted by Bike Bubba at 12:00 PM No comments:

It boggles the mind

Apparently, a young "pop tartlet" is making a statement about childhood obesity by going into a donut shop, licking the frosting off a number of pastries, and returning them to the tray without paying for them.   Seems to me that many three year olds achieve childhood obesity by doing about the same thing, just without telling the world that they hate America.

Personally, I am planning on protesting adult obesity by eating the "Monster Thickburger" at Hardee's, or possibly with a trip to the "Heart Attack Grill."  Anyone care to join me?

In related news, some activists have a really great idea if you're yearning for romance; "affirmative consent" forms that you can sign with your spouse before completing the act.  Optimally, according to the Washington Examiner, participants will film the signing so that there is no doubt about both parties' consent.

With all due respect, isn't this kind of thing--at least if it becomes public--the only reason anyone cares about Kim Kardashian or Paris Hilton, if you catch my drift?  Because if you want to PROVE willingness, you can't exactly sign the contract in a business suit.  I prefer the method Mrs. Bubba and I used--putting a ring on it.  No camera needed.

Along those same lines, an Irish fitness blogger  has achieved "viral" status by revealing that her (ex) boyfriend had given her a black eye after she confronted him about his infidelity.  Now I know a bit about domestic violence, so my condolences to Ms. Murphy for what she's gone through, and it takes some guts.  Good for her.

But that said, I couldn't help but notice that she hadn't put a ring on it, and the statistics are clear; cohabitation is inferior to marriage in many ways, including a doubling of the rate of domestic violence.  Back to the title, it boggles the mind that we can praise women for when they get out of a bad situation, but are unwilling to tell their friends; if you want to avoid domestic violence, make it legal.  Don't just shack up.
Posted by Bike Bubba at 9:54 AM 5 comments:

My grandmother called today, and apparently my uncle (my mom's younger brother) is in hospice care.  I don't believe Chuck knows Christ, and pray for my grandmother as well--this is likely the second of her children she's going to see buried.
Posted by Bike Bubba at 12:58 PM 2 comments:

A good start on immigration, but....

Apparently, former Senator Clinton and Senators Feinstein and Boxer have condemned San Francisco's "sanctuary policy" because it is a big reason a career criminal was able to kill an innocent woman at a tourist attraction.  OK, that's fine, though it doesn't seem to have convinced Senator Feinstein to, say, move away from the city that is imperiling the safety of so many.  Must be nice to have full time bodyguards so you can keep your view of the Bay.

More importantly, there is another politician that needs to be condemned; one whose ICE department released 36007 criminals in 2013 alone, including criminals responsible for at least 193 murders.  If the murder of one due to lax enforcement is worth a strong condemnation, then the murder of 193 ought to be worth impeachment and removal from office, no?

I won't be holding my breath, but reality is that immigration enforcement matters; the country has a right to ask for a background check before issuing work visas--really a responsibility.  What is the consequence?

Note: I do not share Powerline's Opinion that Donald Trump was right, especially inasmuch as he said that Mexico is "not sending their best and brightest."  I've met far too many smart Mexican-Americans to go with that--it takes some doing to come north and learn how to cope with 20 below here in Minnesota.  The link is for the crime rate information.

I'm all for immigration, but again, I would hope that both left and right can agree that a felony record ought to be a reason for denying or revoking the privilege of being in the U.S., and that politicians who allow ineligible people to remain here ought to be at least removed from office, if not imprisoned.
Posted by Bike Bubba at 8:52 AM No comments:

WorldNetDaily reports that a few North Carolina churches are starting to fly the U.S. flag below the Christian flag.  Nice start, really, to point out to the government that they're not #1 in the universe.  Next step; let's get rid of the U.S. flag altogether in our churches and let the cross be the symbol we show to the world.

And that would get rid of one of the most infuriating parts of AWANA: the ritual of the Pledge of Allegiance.  No flag, no Pledge, double bonus; get rid of two forms of idolatry.
Posted by Bike Bubba at 9:25 AM No comments: 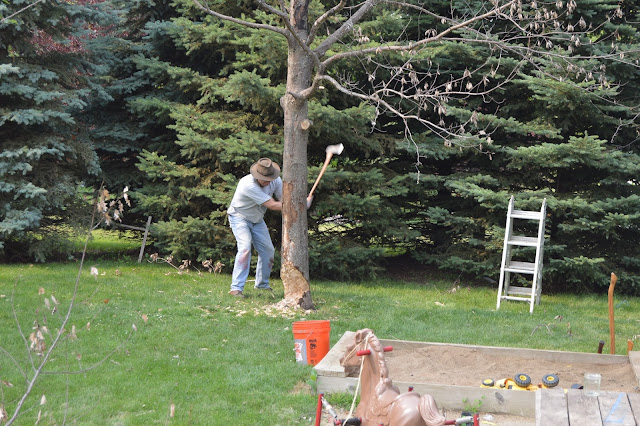 Posted by Bike Bubba at 6:19 PM No comments: